OTA Advocates at the Ohio Statehouse for the Trucking Industry 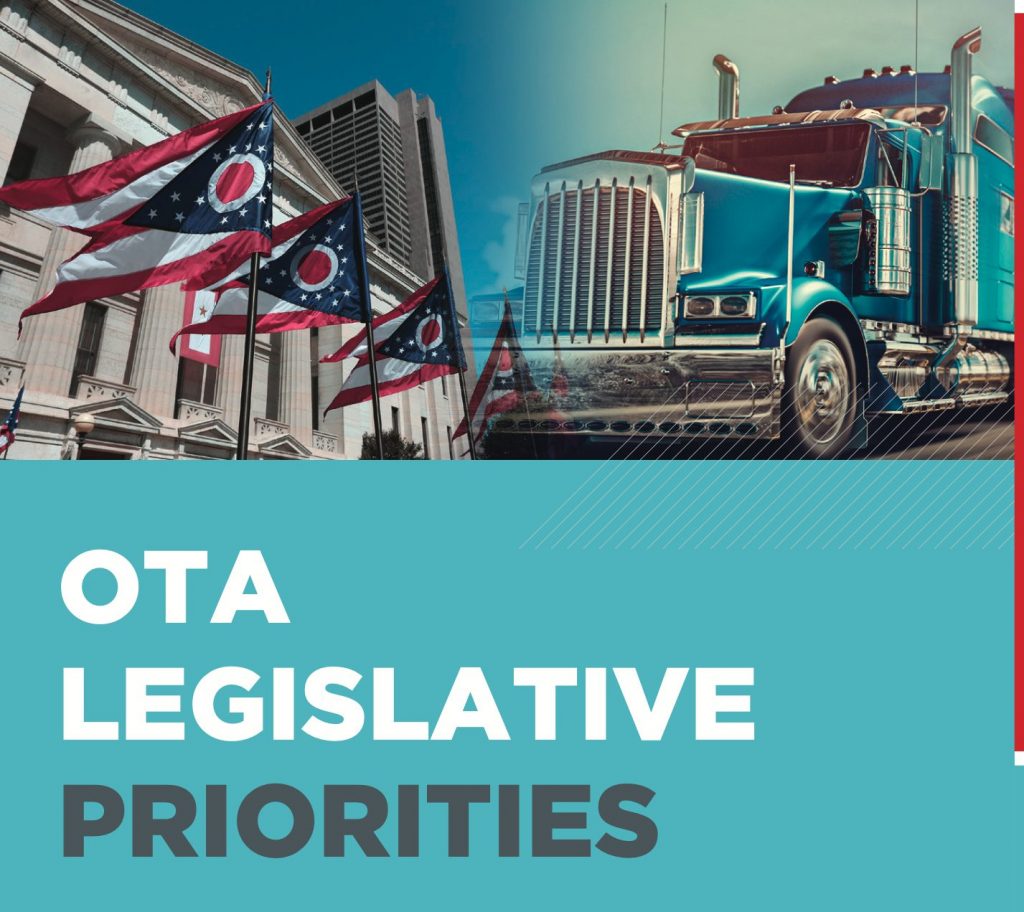 OTA advocates and advances issues at the Ohio Statehouse on behalf of the trucking industry. We take your problems and find solutions, that is what we do best.

The legislative agenda is directed and monitored by our Legislative Committee. The committee membership is open to all current members of the association and meets monthly by conference call.

Below is a list of priorities we are currently working on at the Ohio Statehouse.

Distracted Driving as a Primary Offense
No matter how you argue the matter, driving while distracted, especially using a handheld device is the greatest hazard our drivers face today. Drivers who text and drive are six times more likely to get in an accident than drunk drivers. Ohio is one of only four states that does not have texting and driving as a primary offense. It is time for Ohio to adopt laws that protect our workforce.

Status:
Governor Mike DeWine has made distracted driving one of his main priorities. Early in his administration he formed the Ohio Distracted Driving Task Force, which in 2019 released recommendations that included the enactment of a “hand-free” law as a primary offense.  He has also formed the Ohio Traffic Safety Council, which OTA serves as a member. The governor’s most recent transportation budget included language to make using a phone while driving a primary offense; however, that language was removed by the legislature.

Lawmakers have since introduced HB 283 (Distracted Driving Bill), which would make it a primary offense to use, hold, or physically support a device while driving. The bill, introduced by Rep. Cindy Abrams (R-Harrison) and Rep. Brian Lampton (R-Fairborn), is pending in the House Criminal Justice Committee.

Tax Credit for Driver Training
Driver training is paramount in having a great workforce and our trucking companies invest thousands of dollars annually to train drivers. Unfortunately, workforce training programs in Ohio have made CDL training ineligible for assistance. With the addition of the Entry Level Driver Training regulations from the Federal Motor Carrier Safety Administration it is going to be critical for companies to invest even more into driver training. The Ohio Trucking Association is asking the legislature to develop an income tax credit to incentivize trucking companies to invest in driver training. The credit will be 50% matching nonrefundable credit on income tax returns for sole proprietorships, partnerships and LLCs up to $25,000.

Status:
HB 197 has been introduced by Rep. Reggie Stoltzfus (R-Paris Twp.) and Rep. Rodney Creech (R-W. Alexandria). It was reported from the House Ways and Means Committee and later passed by the full House of Representatives with unanimous support. It now awaits action by the Ohio Senate.

Protection from Predatory Towing
Egregious towing bills on police ordered tows of commercial vehicles are becoming all too common. Bills over $100,000 are on the rise with tows costing $50,000-$80,000 being commonplace. While we have made great progress with changes in laws regarding allowing law enforcement to allow companies to arrange their own tows, if in a reasonable timeframe, and removing immunity for negligent damages by towing companies, there is still much work to be done.

Status:
Multiple bills have been passed (SB 274 in 2014 and SB 341 in 2017) to address predatory towing practices. OTA hopes to build off this work by identifying more areas of improvement and working with stakeholders to get further reforms signed into law.

Fuel Tax Parity
During the 2019 transportation funding bill the legislature increased the revenue for roads in the form of a fuel tax increase, something the Ohio Trucking Association supported, but they increased the diesel tax by 8.5 cents more than gasoline. This is the first time in Ohio’s history that the fuel tax has been bifurcated. While we advocated for paying our fair share, trucking now pays well over 50% of the taxes and fees for Ohio’s roads, while only operating 10% of the total vehicle miles. The Ohio Trucking Association is resolute in our policy that we will not support any increase or indexing of the diesel tax until the gasoline tax rate is raised to match diesel tax.

Status:
Currently, there hasn’t been legislation introduced that would further increase Ohio’s fuel tax, however, SB 277 has been introduced in the Ohio Senate that would reduce the fuel tax, including diesel, to pre-2019 levels.

Sales Tax Exemption for Forklifts
Ohio currently exempts sales and use tax for forklifts purchased for manufacturing, yet does not extend this tax exemption for those in the logistics industry like our neighboring state of Indiana. This puts Ohio’s logistics industry, as well as Ohio-based forklift manufacturers and retailers, at a competitive disadvantage.

Status:
Senator Niraj Antani (R-Miamisburg) has introduced SB 98, which is currently pending in the Senate Ways and Means Committee.

For-Hire Motor Carrier Sales Tax Exemption
Ohio law provides a sales tax exemption on vehicles and equipment that are primarily used in highway transportation for hire (TH).  Those eligible for the TH exemption need to provide the Ohio Department of Taxation their PUCO number or their Interstate Commerce Commission number. Unfortunately, the Department of Taxation is often requiring companies to verify their tax exempt eligibility on each purchase. This antiquated process has become an accounting and administrative burden on companies, which are being forced to provide verification on hundreds of purchases. This process needs to be streamlined to allow Ohio’s for-hire motor carriers to more easily verify their tax exempt status.

Status:
The Ohio Trucking Association has coordinated meetings with the Department of Taxation and impacted members to discuss ideas on how to improve the verification process.