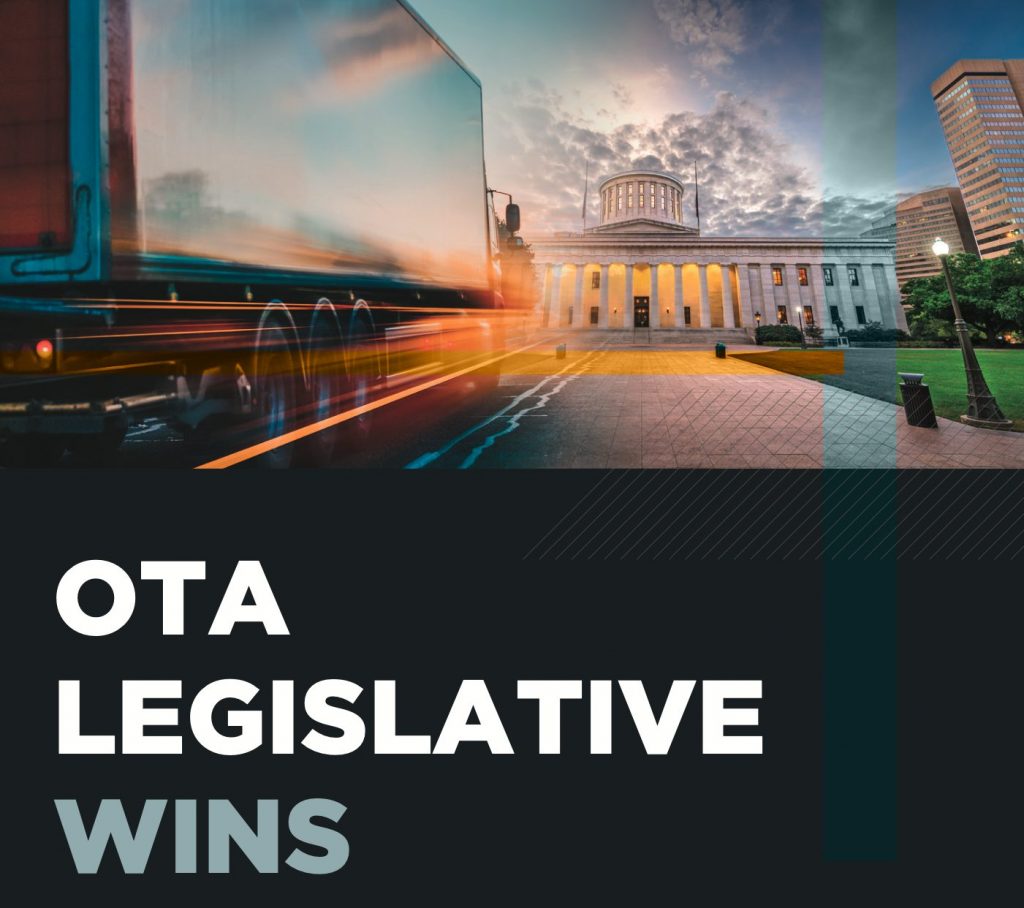 The legislative agenda is directed and monitored by our Legislative Committee. The committee membership is open to all current members of the association and meets monthly by conference call.

While you are only as good as your last success, we would be remised if we did not provide evidence of the value of membership in the Ohio Trucking Association. Here are just a few of the many successes we have had fighting for the trucking industry:

Distracted Driving as a Primary Offense
No matter how you argue the matter, driving while distracted, especially using a handheld device is the greatest hazard our drivers face today. Drivers who text and drive are six times more likely to get in an accident than drunk drivers. Ohio is one of only four states that does not have texting and driving as a primary offense. It is time for Ohio to adopt laws that protect our workforce. Legislation was passed in December 2022 that would make the use of a cell phone while driving a primary offense.

Tax Credit for Driver Training
Driver training is paramount in having a great workforce and our trucking companies invest thousands of dollars annually to train drivers. Unfortunately, workforce training programs in Ohio have made CDL training ineligible for assistance. With the addition of the Entry Level Driver Training regulations from the Federal Motor Carrier Safety Administration it is going to be critical for companies to invest even more into driver training. The Ohio Trucking Association spearheaded efforts to pass legislation that would create an income tax credit to incentivize trucking companies to invest in driver training. The credit will be a 50% matching nonrefundable credit on income tax returns for sole proprietorships, partnerships, and LLCs up to $25,000. The legislation was passed in December 2022 and the tax credit will be administered by the Department of Development.

Even Exchange Program
The Ohio Trucking Association spearheaded an effort to allow Ohio to participate in the Even Exchange Program administered by the Federal Motor Carrier Safety Administration (FMCSA). The Ohio Trucking Association worked with the Governor’s administration in drafting language allowing the state to waive the knowledge and skills test for qualified military personnel to obtain a CDL. Military personnel can use this waiver if they are currently licensed and were employed within the past year in a military position requiring the operation of a military motor vehicle equivalent to a commercial motor vehicle.

CDL School Regulations
The Ohio Trucking Association worked with the Ohio Department of Public Safety (DPS) on clarifying regulations to protect CDL schools from overly restrictive vehicle-to-instructor, student-to-vehicle, and student-to-instructor ratio requirements. The ratios originally proposed by DPS in these administrative rules had the potential to increase costs for schools by forcing them to purchase additional vehicles and hire more instructors to comply with the burdensome regulations.

Grants/Loans for CDL School
It makes no sense that we will provide young adults with loans, grants, and scholarships to pursue a degree, but specifically write out truck driving from eligibility. The Ohio Trucking Association was successful in working with the legislature to establish a $5 million fund specific to CDL training that offers students a 50% grant and 50% loan to complete CDL School. The Commercial Truck Driver Student Aid Program issued its first round of awards in 2022, providing $2.5 million to 30 CDL schools throughout Ohio. Another round of awards will be issued in 2023.

Permanent Trailer Plates
Ohio technically has a permanent trailer plate, but the reality is all that meant was you were paying eight years of fees in one lump sum and the total cost wasn’t competitive with other states. During the 2021 transportation budget the Ohio Trucking Association was successful in getting a pilot project that allowed new commercial trailers to be registered on a permanent basis for only $143 (subject to additional local permissive taxes). This change represented a $150 reduction in permanent trailer registration fees.

Sales Tax on Fuel
Ohio law allows you to file for a refund of fuel tax paid for on road diesel that is used in refrigerated units, but the tax department determined this refund was subject to sales tax. The Ohio Trucking Association negotiated specific language into the tax code to specifically exempt this fuel from sales tax.

Independent Contractor Status
The use of independent contractors/owner operators are as old as the trucking industry itself. Today more than ever this model is being exposed to government overreach, litigation, and inappropriate application that complicates the structure. The Ohio Trucking Association established a seven-factor test used for Workers’ Compensation, Unemployment Insurance, and Wage & Hour that allows trucking companies and independent contractors to enter into these agreements with certainty.

Protection from Harmful Contracts
In 2015, Ohio became the 44th state to protect motor carriers from being held liable for a contracting party’s harmful or destructive activities.

Safer, Liable Towing
While we have a long way to go, the Ohio Trucking Association was successful in getting laws changed that allow for law enforcement to allow trucking companies to use your preferred towing service as long as the response time is reasonable, and police-ordered tows are now liable for damages caused by negligence.

Streamlining Ohio’s Regional Heavy Haul Permit
Regional heavy haul permits allow vehicles to travel up to five destinations under one permit. Unfortunately, when created, the regional heavy haul permit was limited to trips under 150 miles. This arbitrary 150-mile limitation was particularly unfair to trucking companies located outside central Ohio that are forced to travel beyond 150 miles to get to the other side of the state. Through the Ohio Trucking Association’s efforts, we were able to pass legislation eliminating this 150-mile restriction, treating all companies the same regardless of where they are located in Ohio.

Making Ohio Truck Registration Fair
You may not be aware, but Ohio was actually penalizing in-state carriers for base plating in Ohio. We are all aware of IRP and how it works, but Ohio’s tax culture allows for local governments to add on what is called a permissive tax of up to $25 onto registrations of vehicles. Further, the tax was based on the location of your business therefore, out of state carriers were not subject to these taxes. This created a climate that penalized Ohio businesses from base plating their trucks in Ohio. The net effect of this is that if carriers move their base state outside of Ohio their local community’s highway funds from the state will be reduced because the distribution formula is based on the number of vehicles registered in your jurisdiction. The Ohio Trucking Association saw the detriments of this practice and took action. Working with the Ohio Association of County Engineers we took a plan that eliminated the permissive tax on commercial motor vehicles and increased the registration fees for all CMVs. The net effect of this move actually decreased the registration for Ohio based CMVs and allowed for a better distributed tax burden for all carriers. Creative thinking from the Ohio Trucking Association resulted in a win-win for Ohio.

8-Year License Renewal
The Ohio Trucking Association worked with lawmakers to have Ohio join two-dozen other states that allow for an 8-year license renewal as opposed to a 4-year renewal cycle. Extending the license renewal requirements will significantly reduce administrative challenges facing Ohio’s CDL holders and save valuable time that otherwise could be used earning a living.

Truck Parking
The Ohio Trucking Association has spearheaded efforts to address the parking shortage facing drivers. In the transportation budget passed in 2021, we were successful in adding language requiring ODOT to open two closed weigh stations per year to accommodate commercial vehicle parking.